Promote Your Page Too

Wonderful, although spiked with drastic moments, true story, autobiography of Ayaan Hirsi Ali. Emerging from a Somali born family, living also in Saudi and Kenya, learning about various ways of practicing Islam, growing up among cultures and traditions where Islam is a religion of birth, she makes a life altering decision and decides to stay in Europe.  She becomes an atheist (unfortunately)  and surprisingly politically incorrect in the midst of one of the most liberal European nations, Holland.

One thing that I agree with her is her opinion on Mohammed, the founder of Islam.

Imagine a Christian school in a predominantly Muslim country. Imagine religious education lesson, with the focus on Christianity. Imagine the teacher telling all of the children to kneel in prayer and pray rosary or recite a prayer worshiping Jesus. Unthinkable, right?

Here is the link to an article in Daily News that tells about a similar story. This time it’s real, it happens in a Christian country (UK), where a teacher instructed students to pray to Allah!!! 2 boys refused and they were punished. Welcome to Eurabia.

Below is a transcript of this video , from Middle East Media Research Institute, and this statement leaves me speechless. And this is all allowed because Muhammed practiced it. Read it for yourself, and then read more here to learn what kind of sexual activities are allowed with girls younger then 10, according to Muhammed example.

on Frontline PBS, June 24th… that is if you still have and watch TV 🙂

I’ve just finished the book “Escape” by Carolyn Jessop, former Fundamentalist Church of Jesus Christ of Latter-Day Saints (FLDS) member, who escaped with her 8 children, after many years of terrifying life with a man, who was one of the leaders in the FLDS.

She grew up in a polygamous household, and had to marry 50 year old man, being only 18 years old herself and becoming the forth wife. She was abused sexually, physically and emotionally throughout the marriage, not only by her husband, but by her sister-wives also. 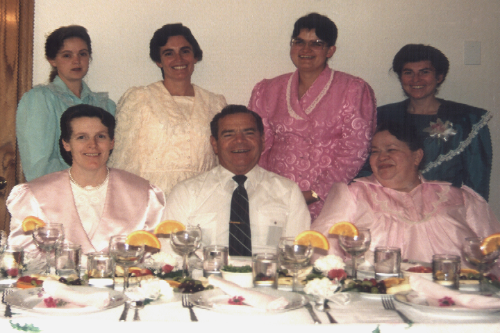 The whole system of FLDS keeps the women as a subject to the men-powered world, which existence is based on perversity and control. They are degrading women’s lives, by diminishing them to working slaves, playing with their minds constantly to keep them vulnerable and subjected to the men’s wishes. Brain washed by the group’s leader’s, constantly abused, kept without educational opportunities, mentally tricked and emotionally drained, sooner or later, they become mentally unstable, depressed and mostly give up.

Carolyn found her strength by caring for her children, and was granted a full custody of her children after her escape from the brutality of the system, which promised heaven, but delivered hell on earth.

Very disturbing recollections of a young woman’s journey from a total believer in the cult’s religious teachings, to the world of freedom and reason.

The belief of FLDS: you can become a goddess in the afterlife if you will please your husband and live in total harmony with him (non-questionable obedience), he is destined to become god. On this picture, Carolyn is first on the right.

Read an interview with Carolyn in “Time”

Excerpt from the book

Even TIME recognizes Evangelicals influence upon every aspect of life in USA. In 2007 Evangelicals constituted about 29 % of population in USA (Catholics 25%, main line Protestants 14%). Called to existence in 1942, National Association of Evangelicals gathered many, and today includes about 60 denominations with 45, 000 churches under it’s wings. They are more heard about and more Media covered than other Christian groups. They are not easily defined and vary from country to country.

Evangelical Manifesto has been released. It’s been worked on for 3 years and it should open up a discussion, reform the image of the Evangelicals in USA, call them to the rededicate their lives to Christ and possibly unite those who identify themselves with this group.

It is trying to redefine the core of evangelicalism, moving it from a politically obsessed right doers toward Christ fascinated, Sermon of the Mount followers, wanting to be

“defined theologically, and not politically, socially, or culturally.”

Recognizing it’s stand with time relevant causes (Wilberforce among others are mentioned) in the past, Manifesto calls Evangelicals for separation from any political views which lead to the peculiar position of being owned by it, and into the

According to the Manifesto, Evangelicals should oppose theocracy, prefer “religious liberty for people of all faiths”, warning at the same time against European animosity toward any religious influences upon society. It also recognizes the age of Internet, as the globalization creeps upon every human being tempting the hearts with secularism as well as religious extremism.

Article by Os Guiness, regarding the Manifesto.